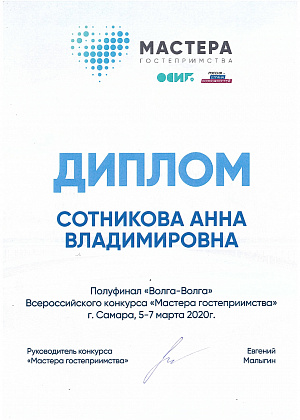 The competition "Masters of hospitality" is a new project of the presidential platform "Russia - the country of opportunities", coorganized by the National Union of the hospitality industry. The competition is aimed at unlocking the potential of professionals, forming new traditions, raising the standards of service and prestige of professions in all areas of the hospitality industry.
The competition is held in several stages: registration and selection stage, under the conditions of which you had to provide a video invitation to your region and pass several tests: a test of abilities and knowledge, a test of abilities to analyze verbal information, a test of assessing the competence of the "Master of hospitality", regional semifinals and finals. According to the results of the bid company, more than 20,000 participants from all regions of the country have registered for the competition in 2020.
There were 99 contestants who showed the best results at the remote testing stage advanced to the semi-finals of the contest. The semi-finalists included marketing Manager of the Four Elements Kirov hotel Anna Sotnikova.
The semi-final was held in two stages: on the first day, participants spent 12 hours solving cases related to the hospitality industry. The second day they presented the projects.
An employee of Four Elements Kirov presented her project "Business hotel for Millennials" about the conversion of 7 Luxury rooms for a new audience. Anna became 27th in the rating of the Volga Federal district. We wii participate in the competition next year and our aim is to reach the final.