On June 28, the Four Elements Ekaterinburg hotel became one of the venues of the URAL MUSIC NIGHT festival. 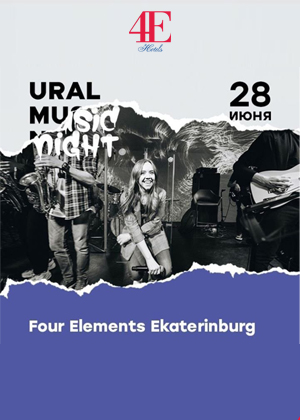 On June 28, the Four Elements Ekaterinburg hotel became one of the venues of the URAL MUSIC NIGHT festival.

In the lobby bar of the hotel there were a lot of guests and there was music that characterized as separate, but directly related to each other era of musical history: funk, disco, soul, hip-hop, R&B and fusion styles, one way or another rooted in jazz music, but at the same time absolutely independent. In this music there is a huge variety of artists unknown to a wide audience in our country. Guests of the hotel, residents of the city and participants of the festival spent an unforgettable Friday evening with "Four Elements Hotels" and "URAL MUSIC NIGHT".

It's easy to become a member of the 4E Life program!

Upon presentation of the loyalty card of any hotel chain, we give privileges corresponding to the status of your card.

10% discount
for frequent travellers! Enter your email and get a personal
discount code for 10% off best available
rate at Four Elements Hotels

Hotels of chain
+7 (343) 310-01-01 (Ekaterinburg) +7 (833) 274-47-00 (Kirov) +7 (342) 227‑67-87 (Perm)
TravelLine: Analytics
Travelline START
Follow the best offers
We use cookies to improve the way you interact with our website. By continuing to view this page, you are agreeing to use cookies. Learn more about our "Cookies Policy".
We use marketing cookies if you have given permission for this. If you do not give permission, advertisements will still be shown, but these are random advertisements. You can make your choice below.